The Meaning of Harambe: Freedom and Gorillas 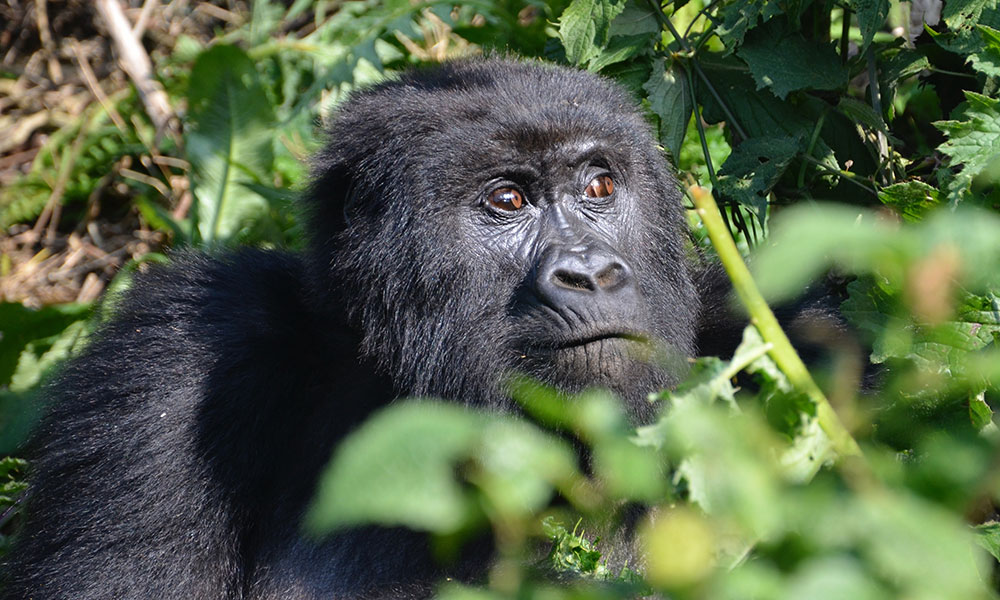 His name was Harambe, which means, “lets pull together” in one of the native languages of his home in East Africa. He was a silverback gorilla and is reported to be a Western Lowland Gorilla.

If he were free, his home would be like  the slopes of the Virunga volcanoes where clouds meet the treetops. He might feast on bamboo and stinging nettle. He would have wives and children to guard and love. The antelopes and golden haired monkeys would walk wide of him.

Humans are his family’s only predators and the reason the gorilla is on the Endangered Species List. Logging camps destroy their habitats in the Congo. Ruthless middlemen kill them because souvenir hands and feet bring money. The poor eat the “bush meat” to survive. Baby gorillas are often stolen and sold to ignorant pet owners and zoos throughout the world.

It’s not easy to steal a gorilla baby from its fiercely protective family. Often the entire troop is murdered so an infant can be sold. The babies are caged for a long journey and sometimes they die along the way.

Gorillas born into captivity never know their “land of a thousand hills.” I imagine it is harder for the stolen gorillas. They were once free and surrounded by family in heart of Africa.

Harambe never saw the jungle where his family came from. Zookeepers bred him behind bars.

He grew up in Texas, but last year, his keepers sedated him and took him from the only home he knew. They sent him to live with two female gorillas in Cincinnati where The Zoo bred more than 50 gorillas in the past 46 years. They hoped to enrich themselves more with Harambe.

Experts say this will help save gorillas from extinction. But organizations in Rwanda and Uganda successfully protect wild gorillas without the need for captive breeding.

There are 880 mountain gorillas that live in the wild.

They are social and travel with a close-knit family and, despite their size, Silverbacks are peaceful, even shy. These vegetarians do no harm unless they need to defend their family.

Gorillas are one of our closest living relatives. We share 98.7 percent of genes and could use each other for blood transfusions.

Rwanda led the way to preserve mountain gorillas. Their programs in the Volcanoes National Park utilizes “extreme conservation” which has led to the recovery of the nearly decimated population.

The Rwandan government has stopped poaching, employed locals, and spread awareness. They work closely with The Gorilla Doctors to ensure the survival of our close cousins, in a way no zoo ever could. The evidence that The Gorilla Doctors make a difference was the 2011 census taken in the Virunga Mountians. It showed the population has climbed 26 percent since 2003.

The mountain gorillas are still at risk. “Gorillas are highly endangered animals. They belong in the forest, not in a backyard. They should sleep in gorilla nests, not in a bed. Captive gorillas are lost forever to those who need them most, their fellow gorillas struggling to survive in the wild.” Dr. Felicia Nutter, regional field veterinarian for the Mountain Gorilla Veterinary Project.

Harambe was shot and killed this week when an unsupervised child crawled through the bars and fell into the moat that separated the great ape from his onlookers.

Harambe weighed 450 pounds and was stronger than 20 men. I believe he didn’t intend to harm or kill the child, whose sole injury was a concussion from the fall. He moved away from the chaos and placed himself between the screaming onlookers and the frightened child.

Social media fuels outrage over this event. Some rail against the negligent parents, others want to hold the zoo responsible.

I read posts by upset zoo-goers. They mourn the loss of their favorite attraction. They loved to photograph Harambe and longed to see him.

This tragedy is not about their loss. The tragedy is found in the arrogance of human beings to think we have the right to confine any creature. It is about educating children to believe that money and entertainment eclipse the rights of animals.

Samadhi is a word often used in yoga classes. It refers to the union of the self with everything around us. It is defined as the final freedom, the divine that unites us; not just human beings but all living things.

Marylee is a columnist for The Elephant Journal, My Life Yoga, FindBliss Boston, Boston Yoga Magazine, and Life as a Human. Her writing explores motherhood and yoga, and focus on her experiences with her young son and the many ways her helps her grow. She is the founder of Chakras Yoga, The 24 Things, and Chakras Yoga Healing Jewelry. Prior to having her son, she performed in Broadway musicals across the country. Marylee lives in Massachusetts with her husband, son, dogs, and chickens.

This piece was originally published in LA Yoga Magazinehttp://layoga.com/community/cause-activism/the-meaning-of-harambe-freedom-and-gorillas/?mc_cid=28ce3c5ca7&mc_eid=685e1911b7